Should there be a Windrush Monument and what should it look like?

June 22nd is Windrush Day, a date that celebrates the contributions of Afro-Caribbean migrants to the United Kingdom. In light of the UK government’s scandalous treatment of many members of the ‘Windrush Generation’ (named after the Empire Windrush ship which brought 492 Caribbean people to Britain in 1948), that same government announced that a Windrush Monument would stand in Waterloo Station, the country’s busiest railway station. Some might question whether such a monument is just a distraction, at a time when the Conservative government continues to pursue a hostile environment strategy against immigrants and asylum seekers. Nevertheless, the integrity of the Windrush Commemoration Committee itself – led by Baroness Floella Benjamin – is not in doubt. This month, the committee will choose one of four designs for the monument, and the public have been invited to share their thoughts. Paul Wilson has taken a look at the designs, which can be viewed here. 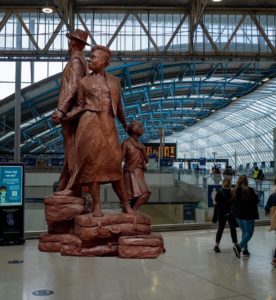 The first design is by Basil Watson, who was born in Kingston, Jamaica in 1958. His design shows three figures in bronze: A man, a woman and a girl, standing on a mound of suitcases which represent their cultures and the travels they have been on. Their striking poses are reminiscent of Paul Day’s much larger The Meeting Place statue, which stands in St Pancras station. Out of all the designs, Watson’s is the most traditional, which some might criticise, but being straight-forward is not necessarily a bad thing. Millions of people pass through Waterloo Station and they cannot all be expected to stop and take a long look at a statue during their commute. Even from a distance, Watson’s design conveys the sense of wonder, excitement and fear that comes with journeying to a new place. 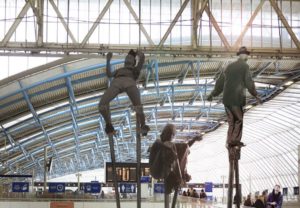 Jeannette Ehlers, a Danish-Trinidadian artist born in 1973, takes a very different approach. Her design shows three figures on stilts, representing the Afro-Caribbean spirit ‘moko jumbie’. Each figure – child, adult and senior – stands for a different generation of British-Caribbean citizens. Their postures exude a carnivalesque atmosphere which would attract the eyes of even the busiest commuter or tourist, and it is easy to imagine Ehlers’ design becoming a must-see attraction for visitors to London, even if its meaning is not readily apparent. 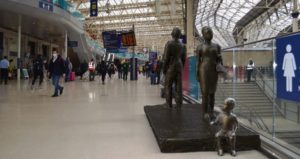 Valda Jackson’s design is more sombre. Born in Jamaica and now based in Bristol, Jackson’s design shows a man, woman and child, standing apart from one another and facing in different directions. In a video interview, Jackson explains that her design depicts the trauma of separation that comes with migrating to a new country, which entails leaving behind family and friends. After more than a year of lockdown-enforced isolation, all of us can relate to some extent to this feeling, but the stage upon which the three figures stand is so bare, this design risks just being passed by, if it is chosen as the monument. 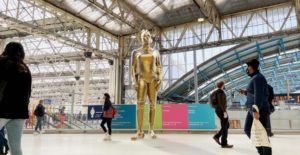 Finally, Thomas J. Price is the youngest of the four artists, born in London in 1981. His designs shows a twelve-foot tall woman made of bronze, but her skin shines like gold. Confident and powerful, the enormous figure is grounded by her lack of a plinth, but still towers over all passers-by. Price’s design draws on the status and history of bronze, for example the West African Benin Bronzes, many of which are still controversially held in the British Museum. Although eye-catching, this solitary and modern-seeming figure is so detached from the context of the Windrush Generation, it might confuse rather than educate those who see it.

Be sure to share your thoughts with the Windrush Commemoration Committee before they announce the chosen design in October to mark Black History Month. The monument is expected to be unveiled in June 2022.

About the Author: Paul Wilson

Paul Wilson studied German and English Literature at the University of Edinburgh. A freelance journalist from the North of England, they are currently based in London.